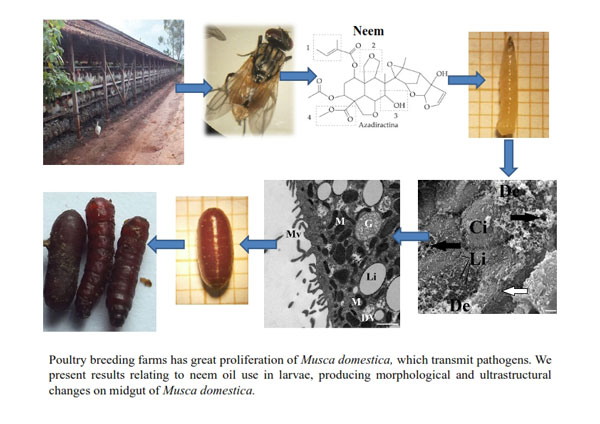 Use of Neem (Azadirachta indica A. Juss) Oil in The Control of Musca domestica L.(Diptera:Muscidae) in Poultry Breeding Farms.

ABSTRACT: Pest infestation, in general such as flies, is a problem faced by poultry workers in poultry breeding farms. Control of these populations is desirable, due to the damage they cause and, most times, it is done through chemical management, with insecticide application. Musca domestica is one of the species with the greatest ability to develop resistance to insecticides, and the digestive system, especially the midgut, is one of the most vulnerable organs to structural alteration, because in it there is production of digestive enzymes and absorption of nutrients. Damage caused by use of synthetic insecticides reactivated studies with bioinsecticides for being one of the most selective options in pest control. Furthermore, they do not cause environmental alterations such as food, soil, water poisoning and they are practically nontoxic to mammals. Among vegetable species with insecticidal activities that have been used a lot, we have neem, subtropical plant that shows low residual power and lower risk of intoxication for mammals and poultry. Thus the objectives that guided this work, was the observation of morphological alteration in M. domestica larvae and malformation of pupae after the use of neem, powder and emulsifiable oil at different concentrations (0,5%, 1%, 1,5%) were tested. Following, after the applications, the midgut of flies in larval stage was isolated, processed and analyzed under light microscopy, scanning and transmission electron microscopy. As in most dipterous, the cell types found were columnar cells and regenerative cells, which showed alterations such as: coalescing vacuoles, intercellular spaces, formation of cytoplasmic protrusions, broken microvilli, rough endoplasmic reticulum and dilated mitochondria. The statistical analysis registered for pupa malformation showed significant results in comparison to control, but there was no difference among treatments. The different concentrations of neem oil contributed in altering morphological and ultrastructurally the midgut in M. domestica larvae, interrupting its development. These results showed that in poultry breeding farms, neem oil can be a pratical alternative to the control of M. domestica.
Key words: Housefly larvae, Alimentary canal, Bioinsecticide, Ultrastructure.

Evaluation of the Possible Hypolipidemic Properties of Quail Egg on Alloxan-Induced Diabetic Rats.

ABSTRACT: This study evaluated the pancreatic histomorphometry and possible hypolipidemic effects of graded concentrations of quail egg administration on alloxan-induced diabetic rats. Thirty adult male albino rats were assigned to 5 groups of 6 rats per group. Diabetes was induced in the rats of groups 2-5 by single intraperitoneal injection of alloxan monohydrate at the dose of 160 mg/kg. Group 1 rats were not injected with alloxan monohydrate. Rats with fasting blood glucose levels above 126 mg/dl were considered diabetic. Upon establishment of diabetes, rats in groups 2-4 were treated with 30, 15 and 7.5 mg/ml of quail egg solution respectively. Rats in groups 1 and 5 were administered with 10 ml/kg distilled water. At the end of the 21 days treatment, blood samples were collected for lipid profile analyses. The rats were euthanized using chloroform anaesthesia and the pancreases were then collected for histomorphometric assessment. Results of the study revealed that rats treated with 30 mg/ml of quail egg solution showed significant (P < 0.05) reductions in the serum levels of total cholesterol, triglyceride, low density lipoprotein and very low density lipoprotein when compared with the negative control group while high density lipoprotein was not significantly increased compared to the negative control. The pancreas of diabetic untreated rats showed immense cytoplasmic vacuolation of the islet cells while the groups treated with quail egg solution especially those treated at the 30 mg/ml showed mild degeneration of the islet cells. In conclusion, administration of quail egg solution to alloxanized rats demonstrated hypolipidemia and ameliorated lesions in the pancreas.
Key words: Quail Egg, Diabetic Rat, Lipid, Pancreas 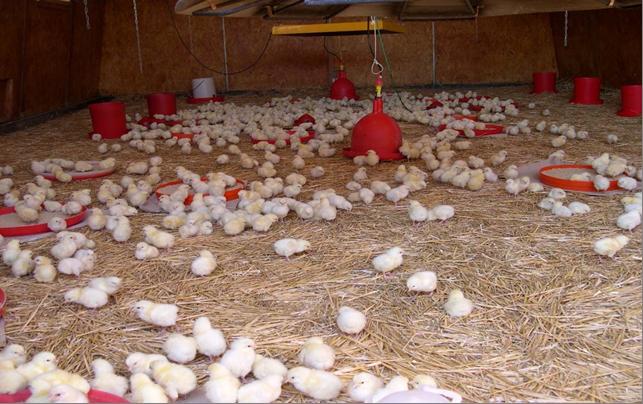 ABSTRACT: The main aim of this study was to investigate the effects of the dietary oils from fennel and anise on the zootechnical performances of Turkey. The essential oils were analyzed by gas chromatography coupled to mass spectrometry. One Hundred turkey males meat strain BUT 10 (Meleagris gallopavo), of one day old, were weighed and randomly allotted into 5 groups of 20 turkeys each. These groups were fed, for 35 days, the basal diet (Control) or the basal diet supplemented with 0.2 g/kg of fennel oil (EOFVD1), 0.5 g/kg of fennel oil (EOFVD2), 0.2 g/kg of anise oil (EOPAD1) and 0.5 g/kg of anise oil (EOPAD2). The mean body weight of EOFVD2 group (807.85 g) was higher than other groups at the end of the treatment (P < 0.05). Likewise, mean body weight of the EOPAD1 group (782.45 g) was different from those of EOFVD1 (769.89 g), EOPAD2 (756.77 g) and Control group (768.35 g) (P < 0.01). The results related to the average day weight gain (ADG) indicated that subjects belonging to the batches treated with EOFVD2, EOPAD1 and EOFVD1, expressed the best performance with ADG respective of 79.46 ± 4.03 g/d, 51.12 ± 27.88 g/d, 50.47 ± 26.94 g/d, followed by control group (49.76 ± 26.67 g/d), against 49.98 ± 28.46 g/d for the EOPAD2 group with a difference which is statistically significant (P < 0.05). These results concluded that supplementing diets with essential oils of fennel and anise, which improved body weight, could be interesting feed additives for growth promotion turkey.
Key words: Essential Oil, Zootechnical Performance, Anise, Fennel, Turkey, Medicinal Plants. 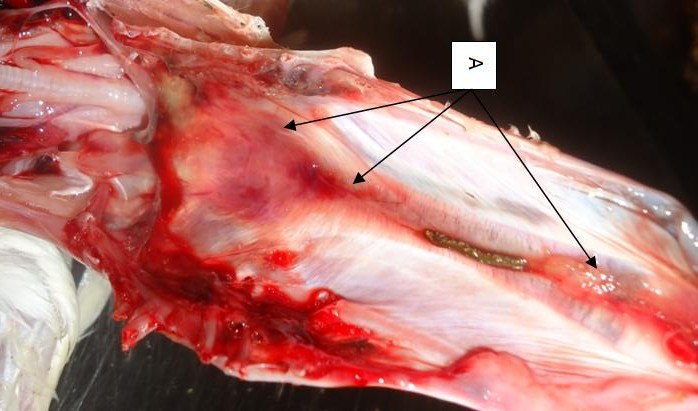 Clinicopathological Manifestations of Pasteurella Multocida (Serotypes A: 1, 3 And 4) Infections in Commercial Chickens in Jos, Nigeria.

ABSTRACT: This pathogenicity study was conducted to document the clinicopathologic features observed in commercial chickens inoculated with Pasteurella multocida serotypes A: 1, 3 and 4. Thirty, eighteen weeks old (adult) commercial chickens were divided into five groups (A, B, C, D and E) of 6 birds each. Chickens in groups A, B and C were inoculated with 0.1 ml of Pasteurella multocida serotypes A: 1, 3 and 4 at concentrations of 106, 107 and 108 CFU/chicken respectively using intramuscular route. Group D were inoculated with 0.1 ml fowl cholera vaccine strain of P. multocida serotype A: 1 at of concentrations of 106, 107 and 108 CFU/chicken, while group E the uninfected control chickens were given normal saline. All deaths in groups A and B occurred on day 7 and mortality rates were 83.3% for group A and 50% for B. No mortality was recorded in groups C, D (vaccine strain) and E (uninfected control). Gross lesions observed were petechial and ecchymotic haemmorhages on the heart and breast muscles, congestion of the liver and lungs. Histopathological lesions observed were mononuclear cellular infiltration and pulmonary congestion. This study has shown that chickens were susceptible to both Pasteurella multocida serotypes A: 1 and 3.
Key words: Chicken, Pathogenic, Jos, Pasteurella, Serotypes

ABSTRACT: This experiment is designed to study the characteristics of village chicken husbandry practice, marketing and constraints in eastern Ethiopia. The study was conducted from July in four selected districts in the highlands of eastern Ethiopia (Haramaya, Kersa, Jarso and Meta). A total of 80 chicken owner households were randomly selected and interviewed using a structured questionnaire. Data on characteristics of village chicken production, feeds and feeding practices, housing, management of chicken and eggs, Marketing, diseases and constraints of village chicken production system were collected. Scavenging chicken production system is observed in all households of the districts. Average flock size of chickens in the study area was 9.4 birds and varied between 4 and 17 birds. In the present study, 82% of the households provide overnight housing within the family house for their chicken. Scavenging is the only feeding system encountered in all study districts with little grain supplementation. Most of the chicken are owned and managed by women (36.75%). Selling of unprocessed eggs and live chickens is mainly practiced. External parasites (mites), Coccidiosis and Newcastle disease were the most important and prevailing diseases in the study area with 39%, 38% and 34% incidence rates, respectively. The magnitude of occurrence of the parasites and diseases were higher in the wet season. Poor genetic quality, lack of extension service, inadequate veterinary service and poor management were the main constraints of village poultry production in the study area.
Key words: Constraints, Ethiopia, Poultry, Production System, Scavenging 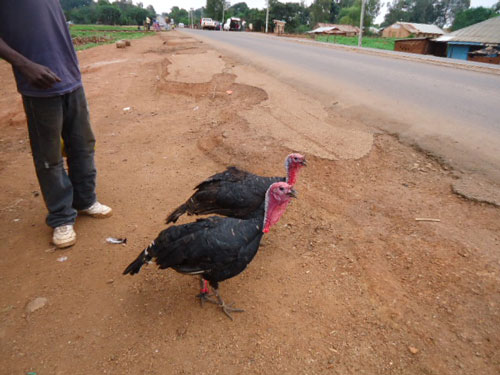 ABSTRACT: The Highly Pathogenic Avian Influenza (HPAI) outbreaks in Nigeria that occurred during 2006-2008, affected 80 farms that kept subsistence indigenous chicken, duck, turkey, guinea fowl and geese in 15 states of the country including the capital, Abuja resulting in a total loss of more than 14,000 birds in backyard, semi-intensive or free-ranged flocks. The rearing of rural poultry in free-range, multispecies, multiage holdings that have low biosecurity levels have shown to expose them to many contact risks. In order to sustain turkey production in the country in view of the ongoing resurgent HPAI outbreaks, it is necessary to assess the impact of HPAI on this species and to evaluate the husbandry and outbreak features of affected flocks. Spatial data confirmed the presence of HPAI virus in both domestic and commercial poultry farms from 25 States and the Federal Capital Territory (FCT) in Nigeria were added to a Geographical Information System (GIS) using ESRI ArcGIS 10.3 (ESRI®, USA) and QGIS 2.8.2 Desktop (OSGeo) and visualized using QGIS. Post mortem examinations of submitted carcasses were carried out and swabs and tissues were analyzed by virus isolation (VI) and reverse transcriptase polymerase chain reaction (RT-PCR). HPAI in turkey flocks were mostly in northern part of the country where most poultry mainly subsistence are domiciled and are more in the densely cities of the north. The poultry management systems employed by the subsistence turkey farmers were mainly semi-intensive backyard and free-ranged system of poultry. HPAI introduction sources vary from the introduction of new poultry species (geese and turkey) from LBM, to the death of neighborhood poultry and extension to turkey flocks and/or contact with free-ranging local chickens. It is obvious that the husbandry and the management system had influenced on the introduction of the virus and the course of the disease.
Key words: HPAI Outbreak, Husbandry, Turkey

Clinical and Pathological Investigation on Turkey Diseases in North-central City of Jos, Nigeria, 2009-2014.

ABSTRACT: Information on turkey production and disease is rare in Nigeria, possibly because turkeys are seldom raised commercially. Also, turkeys require intensive husbandry and health care after hatching, which backyard poultry producers hardly provided especially, when raised in a disease endemic environment. In an attempt to document the diseases militating against turkey production in Nigeria, clinical and necropsy records were reviewed from veterinary practices in Jos and the Central Diagnostic Laboratory of the National Veterinary Research Institute (NVRI), Vom, Nigeria between 2009 - 2014. A total of 306 turkeys from backyard flocks were presented to the Veterinary clinics between 2009-2014 with various health complaints by backyard flock owners. Viral (Pox and Newcastle disease) and parasitic (Helminthosis, Coccidiosis and Ectoparasitism) diseases were mostly diagnosed. During the same period, 42 samples comprising 25 carcasses and 17 cloacal swabs were submitted for post mortem examination, virus isolation and microbiological test. Colisepticaemia, colibacillosis, pullorum disease, airsacculitis and infectious sinusitis are the main diseases diagnosed at post-mortem examination and microbiological test, while none of the samples were positive for influenza by virus isolation. It was observed that turkey rearing was small-scaled and kept as backyard poultry in North-central Nigeria. It can therefore be concluded from this study that turkeys raised in north-central city of Jos are affected by diseases ranging from viral to bacterial and parasitic, which can adversely affect productivity. This can therefore be improved upon by controlling the diseases mostly affecting turkeys.
Key words: Clinicopathologic, Diseases, Nigeria, Turkey