Molecular and Genetic Characterization of Infectious Bronchitis Viruses Isolated from Commercial Chicken Flocks in Egypt between 2014 and 2016.

Setta A, Salem HM, Elhady M, El-Hussieny A and Arafa AS. 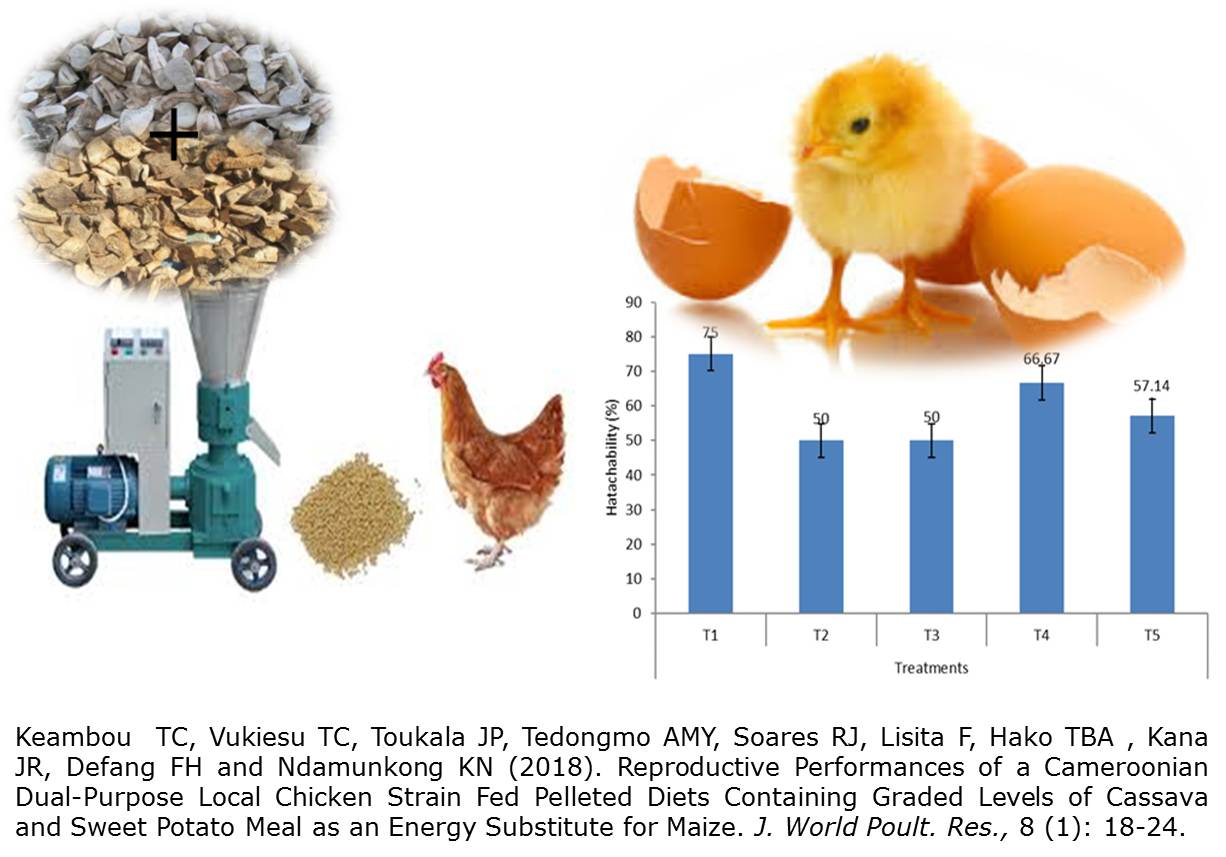 The continuous rising price of maize due to an increasing competition between humans and livestock requires palliative measures to sustain animal production. cassava-sweet potato meal combination can be used as a substitute for maize in feeding chicken. This study aimed at improving poultry productivity through the enhancement of the reproductive performances of Cameroon Kabir chickens fed pelleted diets of graded levels inclusion of cassava-sweet potato meal as an energy substitute for maize.315 Kabir chickens (270 hens and 45 rosters) of 23 weeks of age, were randomly allocated to five treatments T1, T2, T3, T4 and T5 with graded levels of cassava-sweet potato meal as energy substitute for maize, and eggs were collected for the evaluation of laying performances and characteristics. Fertility and hatchability were also evaluated across four successive batches of incubations. The eggs’ weight was significantly (P < 0.05) different between treatments at weeks 2, 4, 5 and 12, highly significant (P < 0.01) at week 9, and very highly significant (P < 0.001) at week 6, 7, 8 and 10. The highest number of eggs laid, egg weight and mass were recorded in chicken receiving 25% (T2) replacement of maize with cassava and sweet potato meal, followed by T4 (75%), T5 (100%), T3 (50%) while T1, receiving control diet without cassava and sweet potato meal performed less for all the parameters. Generally, the trend of the feed conversion ratio was decreasing with increasing the inclusion level of cassava and sweet potato meal. The egg index showed significant differences in weeks 6 and 12, while week 2 showed high significant difference between the treatments. T2 (25%) recorded the highest fertility, while animals receiving control ration without maize substitution recorded the highest hatchability. In general, incorporation of 25% of fifty-fifty percent weight to weight of cassava and sweet potato meal can be recommended for reproduction in chicken without affecting neither the hatchability nor the physical characteristics of the eggs, though hatchability will require better attention.
Keywords: Reproduction, Local chicken, Cameroon, Cassava-sweet potato