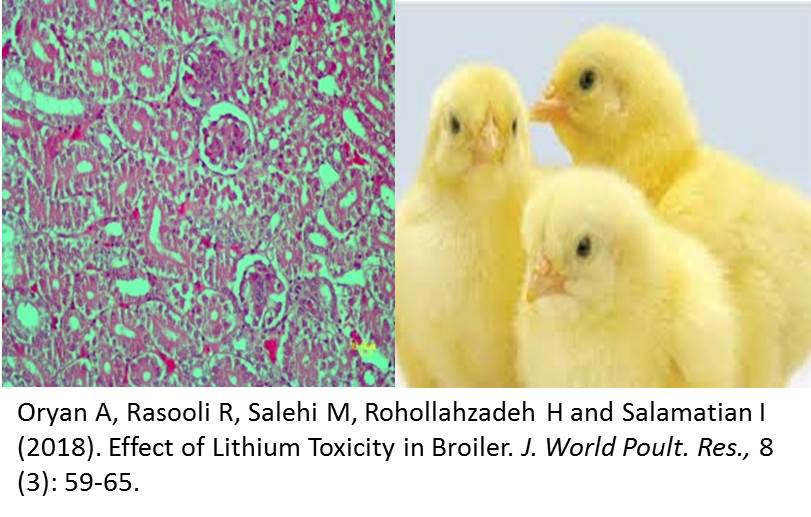 Effect of Lithium Toxicity in Broiler.

Lithium concentration in surface and underground water, in some instances is higher than the standard level in places where lithium-rich brines and minerals occur, and in places where lithium batteries disposed of. This metal has numerous effects on human and other organisms, but there is no evidence about its effects on birds. For the first time we evaluated the effects of experimental lithium consumption in birds. The broiler chicks received daily 200 ppm lithium carbonate in their water, for 20 days and control group received water without lithium. At the end, blood samples collected for chemical analyses and the chickens were then euthanized and samples from brain, kidneys, gastrointestinal tract, heart and liver were collected for histopathological studies. Gross and microscopic lesions in organs were evaluated. Serum Glutamate Pyruvate Transaminase (SGPT), Serum Glutamate Oxaloacetate Transaminase (SGOT) and Uric acid also measured. The significant differences (P < 0.05) between experimental group and control group were seen.
Keywords: Lithium, Toxicity, Bird, Histopathology, Clinical pathology 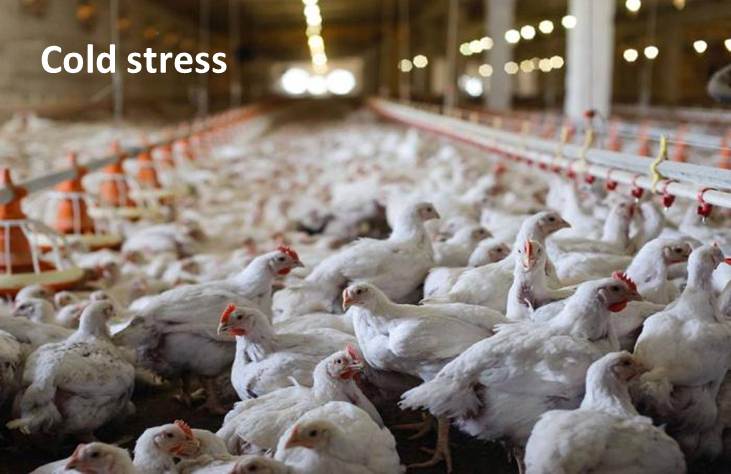 Effect of Cold Stress and Various Suitable Remedies on Performance of Broiler Chicken.

The Effects of some Herbal Essential Oils against Salmonella and Escherichia coli Isolated from Infected Broiler Flocks.

Escherichia coli and Salmonella spp are two bacterial infectious diseases responsible for heavy economic losses in the poultry industry. The emergence of antimicrobial resistance and its potential harmful threat to human health has led to a need to find safe alternatives for the control of these bacteria. To this end, the use of herbal remedies in poultry has been suggested. In this study, we have investigated the effect of essential oils extracted from five different herbal plants against Salmonella spp and Escherichia coli that have been isolated directly from infected broiler flocks. Standard Disk-diffusion method, Minimum Inhibition Concentration and minimum bactericidal concentration were used to determine the inhibitory effect of these essential oils. Also, tetracycline was used as a control group. Among the essential oils, Carum copticum had the highest antibacterial properties. The maximum inhibition zone in diameter against Salmonella and Escherichia coli were respectively 26.7 and 22.5 mm that concern about Carum copticum essential oils. According to the results of this study, it was found that some of the essential oils have a stronger antibacterial effect than tetracycline. So, after the complementary studies, some of these herbal plants can be suggested as alternatives to antibiotics for treating infections caused by these bacteria in poultry industry.
Keywords: Essential oil, Herbal plant, Escherichia coli, Salmonella