ABSTRACT: The elimination of adverse toxic effects of mycotoxins is currently the main strategy in animal production, particularly in poultry. The current study investigated the influence of chronic administration of deoxynivalenol on the health status, biochemical and immunological parameters of broiler chickens and the efficacy of ZnO-NPs and probiotics in preventing and treating the effect of toxicity. The experiment program lasted 6 weeks and was performed on a total of 60 broiler chickens aged 5 days, divided into six groups. Group 1 received healthy feed free of toxins, group 2 was fed with deoxynivalenol (DON), group 3 received Zinc Oxide nanoparticles (ZnO-NPs) and DON, group 4 had ZnO-NPs for 1 week, then DON was added for the remaining 5 weeks, group 5 was fed on ZnO-NPs, 1 g probiotic powder/kg of diet, and DON, group 6 had ZnO-NPs and 1 g probiotic powder/kg of diet for 1 week, then DON was added for 5 weeks. The used dose of ZnO-NPs was 50 ppm, and DON was 5 ppm in the diet. The intoxicated chickens showed adverse changes as increased pro-inflammatory cytokines, serum hepatic, and pancreatic enzymes, as well as decreased free amino acids. The supplementation of ZnO-NPs and/or probiotics improved all toxic changes resulting from DON toxicity, indicating that the metal nanoparticles and probiotics can be used together in poultry feed to avoid the addition of high doses of ZnO-NPs. Therefore, the use of 50 ppm of nanomaterial supplementation plus 1 g probiotic/ kg feed for the degradation of mycotoxins in poultry feed is recommended as it is safe and affordable.

A Microscopic Study on Morphology of Reactive Thrombocytes in Duckling 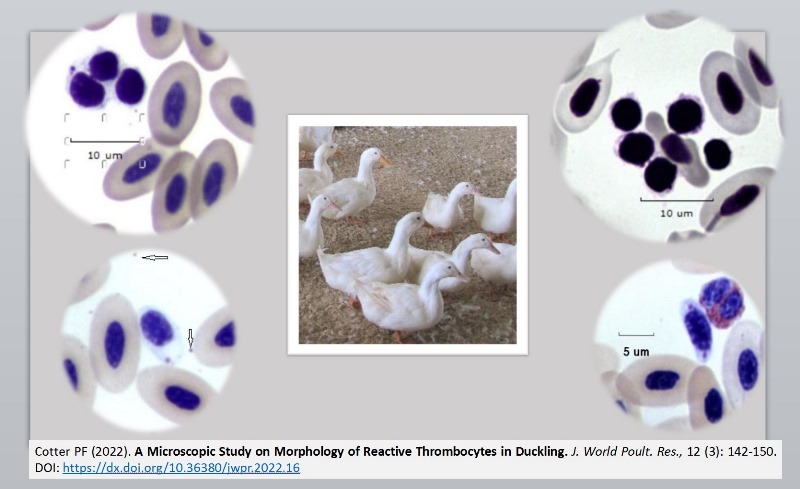 ABSTRACT: Thrombocytes, well known as important clotting factors, and now known to be important as phagocytic cells, might benefit the study of the avian hemogram. Therefore, blood was sampled from 4 late-stage embryos at embryo day 24, and 4 one-day-old hatchlings (d1), and 5 female ducks aged 59 weeks stained by Wright-Giemsa and examined at 100x. Standard differential counts (SDC) of 2 x 200 cells were used to determine total white blood counts (TWBC) and heterophil/lymphocyte (H/L) ratios. Thrombocytes were not included in the SDC but were studied from photomicrographs. Reactive thrombocytes were present in blood films having a normal TWBC or in the presence of leukocytosis (59 weeks). The H/L ratios may or may not be elevated. Reactive thrombocytes can be differentiated from quiescent types on morphologic criteria. These included an increase in the number of magenta “specific granules”, the development of cytoplasmic vacuoles, and a capacity to form aggregates with other Th or with cells of another series. Reactive Th were not necessarily larger in size than quiescent types. In some instances, Th aggregation with RBC (toroid formation) was with sufficient force to distort the RBC cell membrane. It was observed that reactive thrombocytes were accompanied by bacteria, either free-swimming or attached to cell-associated bacteria. Reactive thrombocytes having lost portions of their cell membrane were regularly encountered. As avian thrombocytes are now recognized as important phagocytic cells, as well as having a primary role in hemostasis, they are part of the immune defense mechanism. The presence of reactive thrombocytes in a hemogram should be considered when using hematological data to evaluate immune responses and establish stress status.
Keywords:  Hematology, Immunity, Reactive thrombocyte, Simple and complex toroid, Stress

ABSTRACT: In the past decades, the application of nanotechnology indicated significant improvements in animal health. In the present work, 60 samples of poultry feeds were examined, including 20 samples for each yellow corn, soya bean, and processed feed. The prevalence of total fungi was reported as 100%, 95%, and 100% in yellow corn, soya bean, and processed feed, respectively. Toxin-producing Aspergillus flavus represented 75% of isolates from yellow corn, 88% from soya bean meal, and 50% from processed feed. Aflatoxins were found in 88%, 60%, and 80% of yellow corn, soya bean, and processed feed with mean levels of 18.5 ± 3.216.0 ± 4.08.3 ± 1.7 ppm, respectively. The copper nanoparticles embedded with chitosan were green synthesized using an eco-friendly method, and their antifungal activity was evaluated against aflatoxigenic mold that recovered from poultry feeds. However, the molecular detection of virulent genes of Aspergillus flavus (aflR gene) after their exposure to high doses of copper-chitosan nanoparticles (CuCh-NPs) 150 µg/ml prevents aflR gene expression. The embedded chitosan with copper nanomaterial helps decrease their suspected toxicity to animals by reducing the used doses. Hence, the use of nanocomposites of nanomaterials with green benefits substances, such as chitosan, was the essential strategy of field application in veterinary.
Keywords: Aspergillus flavus, Chitosan, Copper nanoparticles, Nanotechnology, Poultry feed

ABSTRACT: Goose meat is one of the most common types of meat consumed worldwide. Egyptian goose species, known as Alopochen aegyptiacus is one of the first reared poultry species. As meat consumption and the need for animal protein rise globally, edible giblets can serve as abundant protein and fat sources. Recently, edible giblets have become readily available, quick-to-prepare food on the market. This study aimed to reveal the proximate chemical composition (protein, fat, moisture, and ash) as well as the deterioration criteria (pH, Total volatile basic nitrogen [TVBN] value, and thiobarbituric acid reactive substance [TBA] value) of Egyptian goose giblets, including liver, gizzard, and heart. A total of 60 samples of goose giblets, including liver, gizzard, and heart (n = 20 each), were collected from Giza and Cairo cities, Egypt. The results showed a marked variation among each giblet type. The goose’s highest protein content (24.48%), moisture content (72.42%), and fat content (12.18%) were recorded for liver, gizzard, and heart, respectively. Moreover, the highest pH (6.72) and TVBN mean value (5.61 mg/100 gm) were indicated in goose’s livers, while the highest TBA mean (0.67 mg malonaldehyde/kg) was obtained from goose’ hearts. These findings may provide a clear understanding for both consumers and possessors about the nutritional value of goose giblets which could be used as an alternative protein source. Moreover, the obtained data in the current study could help meat technology processors to add nutritional value to goose products using goose giblets.
Keywords: Chemical analysis, Deterioration criteria, Fat, Giblets, Goose, Protein, pH

ABSTRACT: Herbs greatly influence broiler chickens’ performance and may alternate the use of antibiotics in the poultry sector. The study investigated the effects of local natural herbs on Ross 308 broiler chickens’ physical characteristics and meat quality. A total of 702-day-old broiler chickens were divided into two trials consisting of 13 treatment groups fed 11 diets. Treatments included control groups (CGIa and CGIb); Basal diet (BD) free of antioxidants and antibiotics, and CGIIa, CGIIb; BD complemented with antioxidants and antibiotics, and experimental groups (EG); EGIII (1% peppermint + BD), EGIV (1% thyme + BD), EGV (0.5% peppermint + 0.5% thyme), EGVI (1% rosemary + BD), EGVII (1% chamomile flowers + BD), EGVIII (0.5% rosemary + 0.5% chamomile), EGIX (1% onion powder + BD), EGX (1% garlic powder + BD), and EGXI (0.5% onion powder + 0.5% garlic powder). Maximum and minimum feed intake averages were in EGV and EGIII (94.90 and 77.74 kg/group, respectively). Live body weight gains of both EGVI and CGIIa were significantly higher than EGIV, EGVIII, and CGIa. Chicks of EGVIII showed the lowest net weight percentage in relation to live body weight (carcass yield). Breast meat pH ranged between 5.26 and 6.14 (in EGVII and EGIV, respectively) 24 hours after cooling, and between 5.86 and 6.11 (in CGIa and EGVI, respectively) one month after freezing. Breast meat lightness was significantly higher in EGVI than EGVIII at 24 hours after cooling, and it was the highest in EGVI 1 month after freezing. Breast meat redness was the highest in CGIIa at 24 hours after cooling. EGIX showed a significantly higher redness value one month after freezing than EG X, CG Ib, and CG IIb. Yellowness ranged between 7.58 and 13.54 for EGX and CGIa, respectively, 24 hours after cooling, and between 8.29 and 13.95 a month after cooling for EGX and EGV, respectively. Tested herbs had comparable effects to antibiotics on chicken growth and meat quality. Rosemary (1%) had an ameliorative effect on chickens’ body growth. Chamomile (1%) as well as thyme and peppermint mix (0.5% each), improved the palatability for feed.
Keywords: Broiler chicken, Chamomile, Garlic powder, Onion powder, Peppermint, Rosemary, Thyme 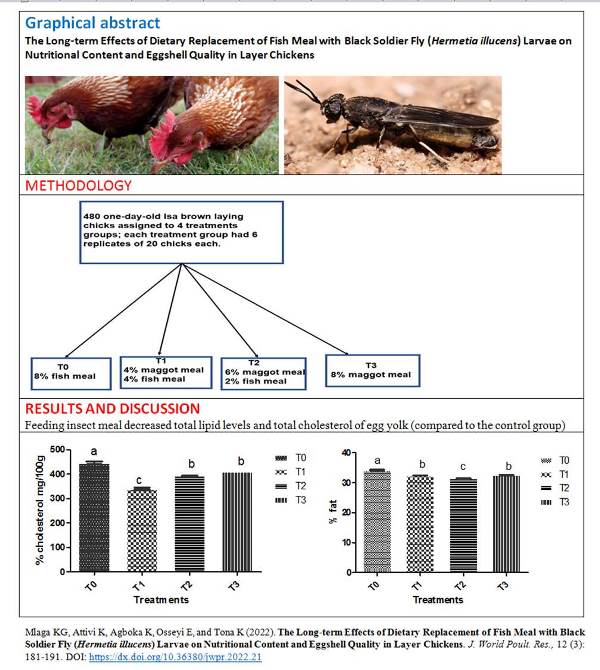 ABSTRACT: Although the egg is one of the foods offering nutrients of high biological value, the diet of layer chickens can change these characteristics. The aim of this study was to evaluate the effect of a long-term dietary replacement of fish meal with maggot meal of black soldier fly larvae on egg quality of hens. A total of 480 one-day-old Isa brown chicks were randomly assigned to 4 dietary treatment groups. The groups were named T0 (8% fish meal), T1 (4% maggot meal and 4% fish meal), T2 (6% maggot meal and 2% fish meal), and T3 (8% maggot meal). Each treatment group had 6 replicates of 20 chicks each. Data were collected on the eggshell quality parameters between 22 and 56 weeks of age. The results indicated that egg weight, shell weight, shape index, shell index, egg surface area, egg volume, density, yolk pH, albumen pH, yolk and albumen moisture content, yolk color, and yolk height were not influenced by the use of larval meals. Although the proportion of the yolk increased with age, there was no interaction between the use of fly larvae and the duration of its use for the collected parameters. However, the proportion of albumen, Haugh’s unit in T1 and T3 treatments were higher than those of T0 and T2. The proportion of egg yolk, the yolk to albumen ratio, and the count of cracked eggs of T0 and T2 varied significantly compared to T1 and T3. Total egg fat decreased significantly as a result of the use of maggot meal. Total cholesterol, High-density lipoprotein (HDL) cholesterol, Low-density lipoprotein (LDL) cholesterol, and LDL/HDL ratio were lower in groups fed larvae meal, compared to the control group. It was concluded that the use of black soldier fly larvae meal during the entire rearing cycle and period of layers did not adversely affect the eggshell quality and nutritional content of the eggs.
Keywords: Black soldier fly, Cholesterol, Egg quality, Haugh unit, Larvae meal, Lipid

ABSTRACT: Two sources of selenium are commonly used in poultry nutrition, the organic and the inorganic forms. This study was carried out to investigate the comparative effect of Sasso broiler breeder feed supplemented with sodium selenite (SS) and selenomethionine (SM) on the zootechnical performance, hematology, and hatching process of chickens. A total of 120 female broiler breeders and 12 roosters of Sasso strain at 47 weeks were equally assigned to three treatments with four replicates per each, including 10 breeders crossed with 1 rooster. The treatment groups were broiler breeders fed a basal diet without selenium supplementation (control), chickens fed the basal diet supplemented with SS, and breeders fed the basal diet supplemented with SM. The inclusion level of each selenium was 0.2 ppm. The collected data included feed intake and egg weight during 8 weeks. In the end, blood samples were collected for hematological investigations. A total of 150 hatching eggs were collected from each treatment. After recording their weight, the eggs were incubated at adequate temperature and relative humidity. On day 18 of incubation, the eggs were weight again, candled, and transferred into the hatcher. Each egg was individually checked every 3 hours during the last 3 days of incubation for hatching events determination. The results showed that breeders fed SM had the lowest feed conversion ratio. There was an increase in the majority of blood parameters in breeders fed SM, compared to other treatments. The lowest duration of the hatching events was observed with breeders fed SM, and consequently, they had the best hatching rate but without any significant difference in the chicks’ quality and their weight of internal organs at the hatch. In conclusion, this study demonstrated that using selenium is beneficial, especially in the organic form, which appeared to be more efficient, compared to the inorganic form.
Keywords: Broiler Chicken, Hatching events, Hematology, Selenomethionine, Sodium selenite

Effects of Xylanase Supplementation on the Performance, Nutrient Digestibility, and Digestive Organ Profiles of Broiler Chickens: A Meta-analysis